The next leg of my birthday travels took me to Sicily, a part of Italy that I have never visited.  I rented an apartment by the sea, twenty minutes from Palermo.

In search of all things truly Sicilian, I drove my battered hire car for a day exploring the centre of Palermo, with Denise and Shan who had joined me. I have no photos for this it-should-have-been-simple-but-it-wasn’t journey, but let’s just say, I have learned how to drive the Italian way, and I know why all hire cars have dents.

The rules are:
– Never give way, even if it is someone else’s right of way.
– Yes you can fit between two parked cars although a grape skin will barely fit between the metal.
– Motor cycles will overtake you on either side and sometimes at the same time.
– You will be honked to move on, even though to go forward would involve an accident with oncoming vehicles.
– Drivers don’t argue with the buses, so stay in their slip stream and you can get through.
– Everyone gesticulates rudely at everyone else, and it’s important to respond in similar fashion if you want to keep up your street cred. 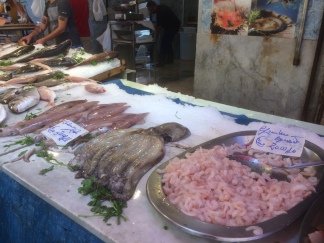 Food was high on our agenda. The street markets are a riot of colour and objects to eat that are unknown outside of this island. Fish street food is delicious, and we worked our way through a list of ‘must eats’, courtesy of Shan, who had Sicilian colleagues at work. My knowledge of  Italian food being mainly Tuscan, I had never heard of some of the dishes.  ‘Arancini’, a Sicilian speciality, is the most delicious local snack dish – a mixture of savoury fillings that are heated inside a ball of pressed rice.  I had also never known a brioche ice-cream.  This is a sweet milk roll stuffed with any flavour ice-cream you choose and once you have finished it, your belly will sink to your toes.  Delicious but a meal in itself.  I had ‘zuppa d’inglese’ flavoured ice-cream, which is custard with chocolate pieces in it.  When I pointed out that I was from England but had never heard of English soup, the woman in the gelateria told me that it wasn’t English, it was Sicilian.  I’m sure this makes sense on some level…

Life lesson learnt on this day: if you see a prickly pear fallen from a tree, (known here as Pears from India) do not under any circumstances pick it up in the notion that it is free food – the skin will leave a thousand small spins embedded in your fingers and it takes about two hours for the pain to subside. Instead buy the ready skinned ones from the street sellers. Worth the money.

Apart from food, there is the rich history of this island. We visited the Catacombes. Pay three euros and you can see a couple of hundred clothed real skeletons in various stages of mummification. I found this neither macabre nor frightening, but I did wonder why humans feel the need to preserve the body, when the spirit has so clearly passed on. Their sagging jaw bones, the open eyed sockets, the traces of human hair on the cranium, the straw stuffed limbs and faded decaying clothes all made me take the firm decision to be cremated and be done with it when my time comes. Still – it was interesting.

Palermo was full of litter and graffiti and traffic and life. The historic buildings were lovely, but as incongruous as the late Queen Mother at the Notting Hill Gate Festival.

The following morning I realised that staying in Sferracavallo, just west of Palermo was the perfect place to rent an apartment as opposed to being in the city. This small fishing village was relatively untouristy and not overly crowded, except at night. You can see the boats set out in the morning and come back with mussels. Everyone around us speaks Italian and the shops clearly cater for local families and workers. At a local bar we have met ‘Frank’ aka ‘Francesco’ who has lived in California running an Italian restaurant for the past forty years.  He is back in Sicily visiting his brother and was eager to tell us all about the area.  He speaks English with the heaviest of Italian accents and was only in America to make money.  I totally understand.  Why be anywhere else but here, if you had a choice?

The harbour views from our apartment speak for themselves. A cup of tea on our terrazzo in the morning breeze and the bluest of skies and you feel all’s well with the world. 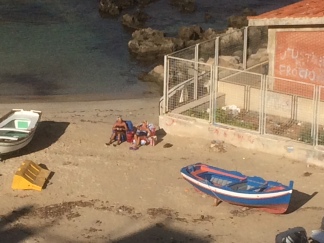 One thought on “Sun, Sea and Sicily”

The Restorative Properties of Tea